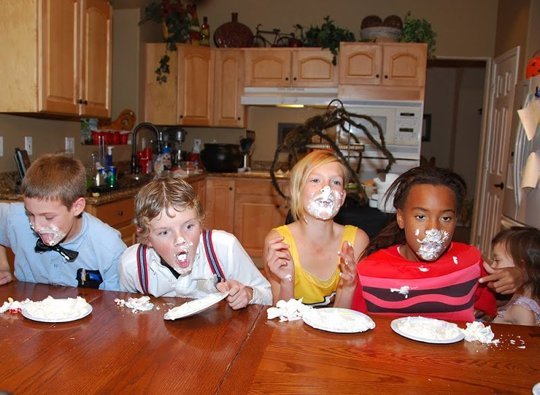 All of us know that  teens love having fun and the Halloween parties are the best place for such teen crowd to have fun. Bobbling worms is an interesting teen Halloween Party Game which requires less planning and brings great fun.

Bobbling for worm is kind of race game for the teenagers in your Halloween party. You must first know the number of participants to play the game so that you can bring the disposable plates accordingly. Make sure there is one plate for every teen player in your party. Now keep 6-10 gummy worms in each plate and cover them with whipped cream. Do cover the worms properly so that they are not visible clearly.

This is a one minute party game and thus, the players get a minute to win it. Call the players to the playing area and make them sit around a table. Place the plates in front of each player and explain them the game. Their challenge is to search and take the gummy worms out of the whipped cream. Give them an extra plate to keep the worms. The rule in this game is that the players can’t use any of their body parts except their mouth to take the worms out of the cream.

Blow a whistle when the time is out. No player is allowed to search for the gummy worms after the set time elapses. Anyone doing so will be disqualified from the game. The player collecting maximum number of worms from the cream will be the winner in the end. Do keep some attractive and interesting gift according to the teens’ taste. The whole idea about this teen Halloween party game is to create huge fun and laughter in the party.

Note:  You can get these gummy worms from the local stores or can also make them at home. See the Halloween Party Food Ideas to know how to make the gummy worms at home.