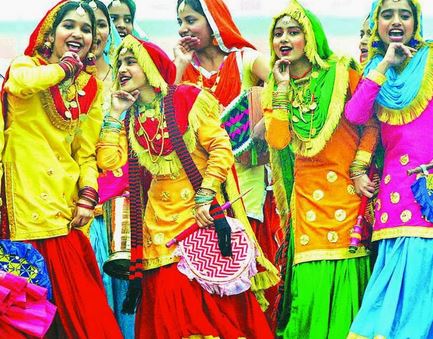 The Invitations can be computer printed with the Bhangra Dncers in the backdrop or handmade. You can use dry wheat, pulses etc for decorating your card. The wordings can be Balle Balle Shava Shava Calling all the Punjab de Puttars te Kudiyan, A rocking Punjabi party is in the offing at__________ on ________.

Decorate the party hall in vibrant colors using your old dupattas and saris. If possible, give your venue the raw look of a village. Use bangles, musical instruments and hay for the decoration .If possible, make a small hut and keep some earthen pots in front of it to give a Punjabi village feel .
Dress Code : Ask your guests to wear traditional Punjabi attire Kurtas and Patiala salwars, Sherwanis with lots of accessories.

Game-1 Convert some of the hindi songs in Punjabi language and let your guests guess the song. For every correct answer ,give away a small prize.
Game-2 Pitthu : This is a very popular outdoor game of the Northern India and you need a tennis ball and seven flat pieces of stones-leftover. Pieces of marble and granite are great, so scout around a house being constructed. Divide the guests into two teams. Members of the two teams take turns trying to break a pyramid of 7 marble/stones (the pitthu) by throwing a tennis ball at it. When the pyramid is broken, one team members try to rebuild the pyramid while dodging the tennis ball, which members of the other team throw at them. If a player is hit by the tennis ball, he or she is out of the play. The team that rebuilds the most pitthus wins the game.
Game-3 Kotla Chapaki : This is another game played by boys and girls in Northern India .Ask your guests to sit in a round circle facing each other while one player with a handkerchief or a dupatta in the hand ,makes rounds, singing “Kotla Chapaki Jumme Raart Aayi Ae, Jeda Agge Piche Chaaku Ohdi Shaamat Aayi Ae” and trying to drop the handkerchief behind a player without him noticing it. If the players completes one round and the person behind whose back ,the handkerchief was dropped fails to notice it ,he/she is out of the game.
Game-4 Chicho Chich Ganeria : This game is for both boys and girls. It is generally played by two teams and involves drawing as many vertical lines as possible with the help of chalks. It is an outdoor game played between two teams. The playing area is divided into two and allotted to the teams. Each team has to make small vertical lines with chalk in the given time limit at places which cannot be detected by the other team members. After the given time, the teams exchange courts and try to find and cancel out the lines made by the rival team members. Then a final count of the lines is made by the host to decide the winner .
Other Activities : Have a lassi drinking or matki balancing and painting competition among the teams. You can also have a Punjabi bride competition. Divide your guests in teams and ask them to make one of the members a Punjabi kudi /bride and bridegroom/munda amongst themselves with whatever stuff that they have.

Ideas For The Menu For Baisakhi Theme Kitty Party

Do let me know what you think about the Baisakhi Theme Kitty Party Ideas.