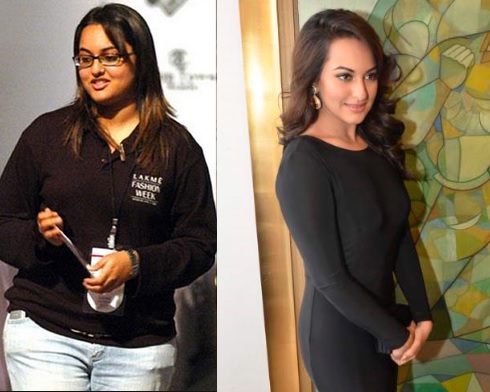 Sonakshi Sinha who was always known for her plump and tubby figure is now turned into a hot and fit chic. The actress is surprising her fans and audiences with her new toned image with a glass-honed figure.

The lady recently appeared the ‘Jhalak Dikhla Ja’ grand premier night with Akshay Kumar and amazed the audiences with her toned and slimmer figure. Sonakshi Sinha also flaunted her glass honed figure in ‘Comedy Nights with Kapil Sharma’ where she was donned in a beautiful orange jump-suit.

Sonakshi Sinha weight loss is one of the most trending topic among the ladies currently and people are more interested in her toned figure than her recent film “Holiday”.

She is one of the most talked about weight loss transformations in Bollywood. We all know that the lady has always been battled with her weight issues and not much people know that she weighed a whopping 90 Kgs before she entered Bolywood. However, her determination and hardwork paid off and she is now flaunting her gym-toned zero figure.

The actress is simply wowing the audience with her appearances in award ceremonies, leaving the ladies in audiences dying to find out the secret to her sexy new figure.

The Dabangg girl is said to be following a strict diet plan along with the regular workout sessions and yoga. She is currently on high protein and low carbohydrate diet schedule reportedly. The lady is also having several cups of green tea in a day to get and maintain the slimmer and sexier figure.

While the actress is not yet turned into a zero-figure silhouette, but she has lost her chubbiness and curves undoubtedly. In an interview Sonkashi Sinha states that she never tried and wanted to become size-zero and her target is to get a slim, toned and perfectly shaped body.

Fitness Mantra of Sonakshi Sinha Weight Loss – She does not have carbohydrates after 6 pm.

Sonakshi Sinha’s more recent film Holiday with Akshay Kumar is making a very good business and her upcoming movies include Prabhu Dheva’s ‘Action Jackson’ and will also be seen in ‘Tevar’ opposite Arjun Kapoor. She is reportedly set to be part of Ashutosh Gowariker’s film “Mohenjo-Daro’ pairing with Hrithik Roshan.