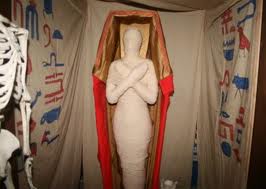 You will need a dressed mummy for this game. You can use the mannequins used by dressmakers for this game. Wrap the mannequin with bandage and give it a look of mummy. To create a scary and creepy effect you can also put some blood marks all over the mummy. Before you start wrapping the mummy, put a DEVIL’S MARK somewhere in the mummy.

Make pins with all employees’ names and as they arrive give them a pin with their name and ask them to prick it anywhere on the mummy. At the end of the party, the mummy will be undressed slowly and the person whose name pin is closest to the DEVIL MARK will be announced as the winner of this Office Halloween Party Game.

You can also purchase a witch from any Halloween party suppliers instead of the mummy and mark a DEVIL MARK anywhere in her body and the game goes similar. You can keep the mummy in a coffin to create a scary effect also do not forget to decorate the party hall with scary and creepy Halloween party decorations. Check the Homemade Halloween Party Decoration Ideas.