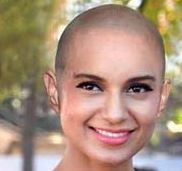 After playing the role of bold and straightforward Haryanvi sports girl in Tanu weds Manu returns, Kangana Ranaut is now getting bald for her next film Katti Batti.

The much awaited trailer of the film Katti Batti will be released on 14th June. The film is produced by Siddharth Roy Kapur and is directed by Nikhil Advani. The leading star-cast of the movie include Kangana Ranaut and Imran Khan.

The story is all about a live-in relationship of Imran Khan( Maddy) and Kangana Ranaut (Payal). The story goes smooth in the beginning but changes when Kanagan gets pregnant. Unlike other such stories, here the girl (Kangana) who is playing a rich brat goes easy with her pregnancy while the middle class boy Imran Khan proposes marriage.

So the story seems to be pretty different from usual romance and drams and it would surely be interesting to see how a rich brat girl who gets pregnant without marriage handles her pregnancy and how she faces the world. Kangana Ranaut is a versatile actress and has been known for her powerful performances in the movies like Fashion, Queen, and now Tanu weds Manu Returns.

Her role as a pregnant lady would definitely attract her fans to see the movie. The movie is scheduled to released in the month of September 2015. The date however, is not yet announced by the officials.

While Kangana is not the first actress to get bald for her roles, let’s see what she now has to please her fans. It’s no more a secret that her role as Datto in Tanu weds Manu Returns and Rani in Queen were loved too much by people.

So, its just a matter of few days, and we will see the first trailer of the movie Katti Batti. Hope Kangana rocks this too.