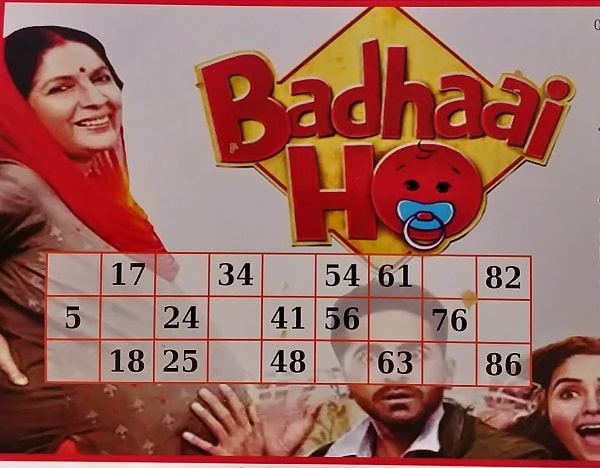 Pregnancy Theme Kitty Party is one of the latest themes for the kitty party. Although we played this theme in our Lions Club Party you can anyways plan it in your ladies kitty party or even in a couple kitty party. Since the theme is all about pregnancy and babies, it has all the naughty kitty party games. I am listing here the entire details of this new and interesting theme kitty party. Do leave your comments below in the comments section if you have any kind of doubts or querries. 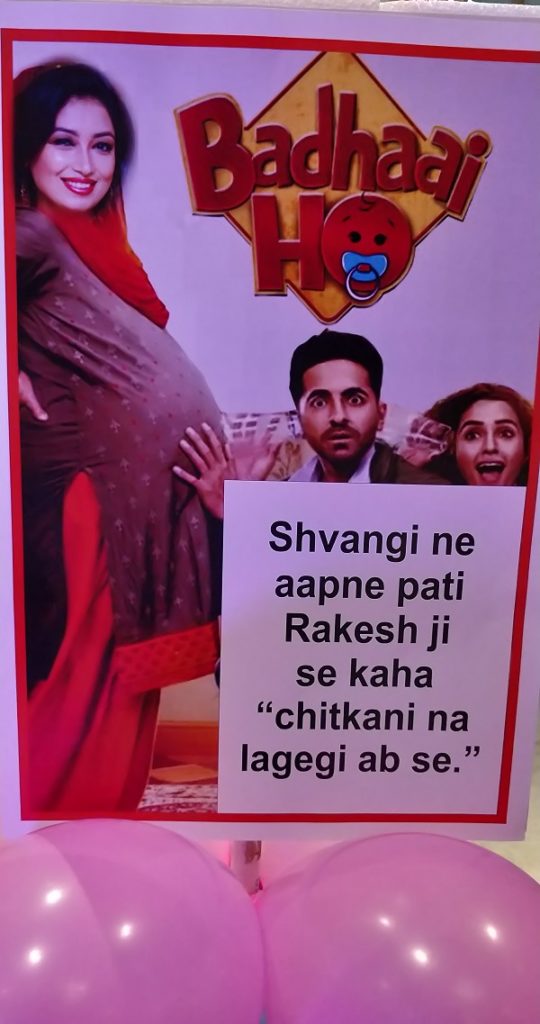 I have already shared one other pregnancy theme tambola ticket here in my blog, but today we played a new tambola game which was with Badhai Ho movie poster but you can play this tambola in any of your kitty parties.

This tambola game was to be played without a pen. The host will give the tambola tickets to everyone and then start calling out the number. Whenever you get any of your number cut, the host will give you a stick/pen/ball or anything, Host will be carrying a certain number of these items. Now when the host’s items are finished, members will start taking it from the member sitting on their right. After 50 numbers are called out, the member having the maximum number of items will win.

In this game, call all of your members together and make them sit on a chair. Now give one unblown balloon (big size) and a satin ribbon each. The challenge for the members if to blow the balloon and insert it in their t-shirt as if they are pregnant. Now they have to tie their feet with the satin ribbon and come to the finish line. The member who finishes the challenge first will be the winner. I have already shared a similar game named Men Get Pregnant.

In this game there were alphabets cutouts were there and the challenge for members was to separate the X and Y chromosomes from the bundle. This is an individual game and you have to call the members one by one to play this game. If you have a big group with too many ladies, you first need to make teams and then call one member from each team to play the game.

In this game, the members have to put a blown balloon in their dress as if they are pregnant and then place a small ping pong ball in her knees. Now she has to walk a bit with the balloon in the tummy and ball between the knees and drop it into a jug kept at a distance. I have already added a similar game here in my blog though. 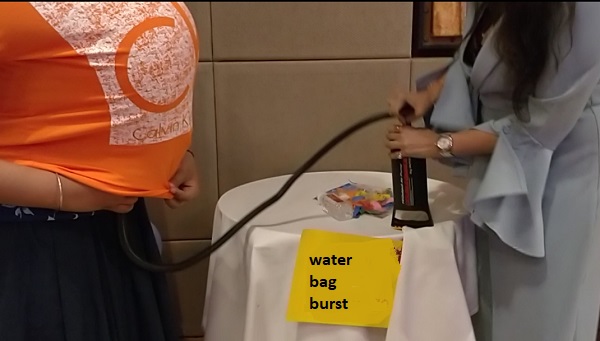 This was again a very hilarious game to be played with two members. In this game, the members were supposed to wear a T-shirt, put in a non-blown balloon and a baby inside and then pump up the balloon with the pump. When the balloon bursts the baby will fall down and that time will be counted. The couple who does that first will be the winner of this game. 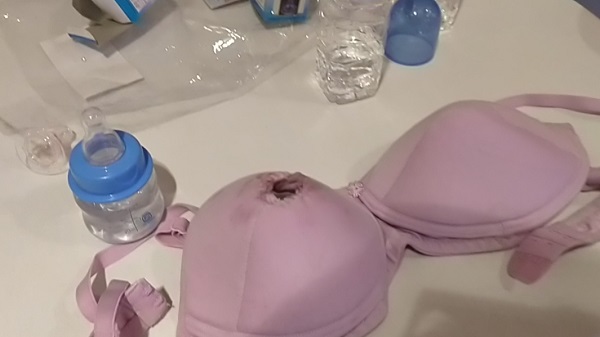 This was one of the most hilarious games I have ever played in my kitty parties. It is again a couple party game so you have to call two ladies to lay this game. In this game, there was a bra with a hole in one cup and then there was a small feeding bottle with milk in it. One member will wear the bra and the other member will suck the milk from the bottle. The couple who finishes the milk in minimum time will be the winner of this game. It was a super fun game and created a burst of huge laughter at the party.

In this game, the members were given a baby doll and a nappy and they just had to wrap the cloth nappy to the doll in a proper way. The member who does the challenge properly in the given time will be the winner of this game.

These were the games and ideas in our Pregnancy Theme Kitty Party recently. Do let me know via comments, how did you like the ideas.