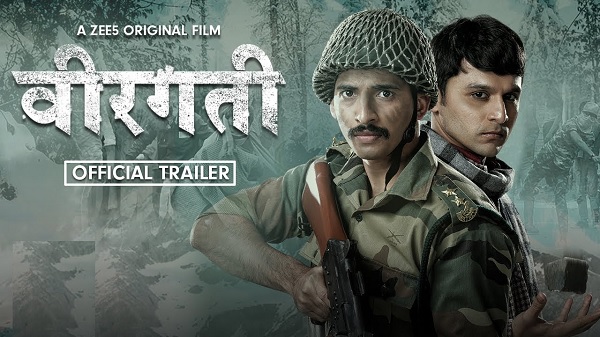 Infused with the spirit of patriotism and addressing an important issue, ZEE5’s Marathi Original movie Veergati was the perfect movie to watch this Republic Day.

The movie Veergati is based on the true incidents which happened in Kashmir. Produced by Roshan Kanal’s Daytee Pictures and directed by Vishal Desai and Raju Desai, this film is an emotional story of a martyr and his patriotism. It is the story of those unsung heroes of our nation who have sacrificed their lives for the country. It also highlights the challenges that our soldiers face while they are on their duty in the chilly winters.

However, more importantly, the movie revolves addresses the sensitive issue of Kashmir and how our brave soldiers have been fighting for it. The film shows how the Pakistani militant groups brainwash young lads in the name of Jihad and how they provoke them to fight against India.

Nikhil Chavan has already a huge fan following, thanks to his role of an army officer in the popular Marathi TV series Lagira Jhala Zee. He has done an excellent job in the role of an army officer in this movie too. What makes things interesting is the fact that Nikhil plays the role of a Muslim soldier in the movie, which further helps the movie explore its complex yet relevant themes. Even the supporting cast featured actors such as Yatin Karyekar, Radhika Harshe, Aditi Bhaskar, Gaurav Ghatnekar, Rinku Karmarkar and Ajit Jha to name a few. Each one of them proved to be incredibly convincing in their roles and were a treat to watch.

What I thought about the movie?

The movie overall is very enthralling and compelling. It makes the youth think more about the jawans fighting for our nations on the borders. We need more of such movies in our cinema so that the youth get to know of this side of the life.

The energy of our youth and the bravery of a jawan can together do wonders and it is showcased very beautifully in the movie. On the other hand, it is very sad to see how Kashmir which was called the Paradise on Earth is getting blooded. We wish we could make it a Paradise again. Apart from the performances and writing, another major highlight was how gorgeously the valley of Kashmir was filmed in the movie.

Overall, Veergati is an emotional look into the lives of our brave soldiers fighting for our country and its powerful narrative will certainly boost up the spirit of patriotism within you.

Releasing the movie on the Republic Day was indeed a great idea as what else could be a better day to remember the sacrifices these jawans have given and pay them a tribute.