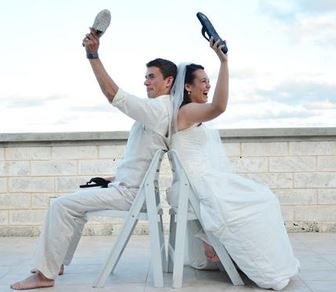 Valentine Games . This is a very funny game and has to be played with one couple at a time. Make the couple sits back to back on chairs. Ask them to share one their shoes with each other. That means the husband will hold one his, and one his wife’s shoe and similarly the wife will hold one her and one his husband’s shoe.

The anchor will then ask some questions, and both have to raise the shoe according to the answer. When both husband and wife will raise the same shoe in any answer they will get one point.

The questions can be-

The couple who gets maximum points wins.