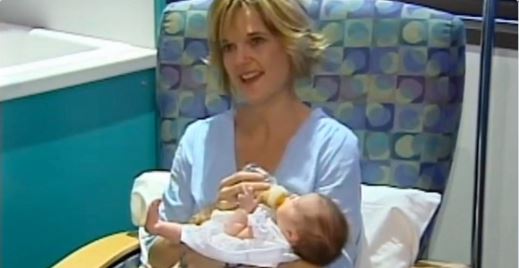 Miracles happen, but this is something absolutely astounding and breathtaking. Doctors of Texas Children Hospital recently performed a life saving surgery where a baby was born twice. Yes I mean it. Doctors took out the baby and put her back in the womb after two hours.

Keri McCartney, a resident of Texas was 23 weeks pregnant when she went for an regular ultrasound checkup. During the check-up doctors discovered a grapefruit size tumour on the baby’s tail bone. This tumour was not cancerous but was fatal as it was stealing blood from baby’s heart. This was something very rare and statistics says that it happens about one in 40,000 babies. The local doctors seeing the fatality of the case, refereed the baby to Texas Children Hospital where this miraculous surgery took place.

Surgeons cut Keri’s abdomen and pulled out the entire uterus. Without disturbing the placenta, they pulled out half of the baby’s body and removed the tumour. Dr. Olutoye the senior surgeon said, ” “We don’t bring the whole baby out of the womb because we don’t want the uterus to think the pregnancy is over and the baby’s coming out”. After removing the tumour which took 2 long hours, the baby was put back into Keri’s womb to develop as a normal baby. She was inside her mother, developed completely and born twice after ten weeks. The baby born healthy and has just a small scar on her back. She is a normal baby and is perfectly fit to survive.

So technically the miraculous baby was born twice.