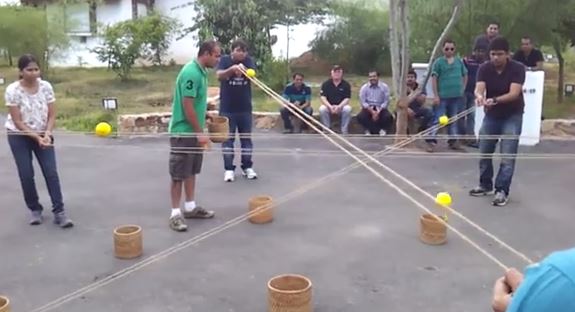 Kitty Party Games for outdoors. This is a nice game to be played in parties. This is a team game and thus if you have big group of people you can divide them into teams before you start playing the game.

This game can be played with many members and thus you need to divide your guests into teams. Make sure that the team members are even in numbers like 4, 6, 8, 10 etc.

Give the team a set of ropes, buckets and soft smiley balls. Keep the number of ropes, buckets and balls according to the members in a team. Now make them hold the ropes as shown in the image above The members have  to move the ball slowly on the rope and drop it in the bucket kept below. This is a two minute game and the team which managed maximum numbers of balls in the basket will be the winning team of this game.

Hope I am clear enough with the game above. If you have any doubt feel free to leave a comment below in the comment box. I am here to help you out with your queries about my kitty party games for outdoors.