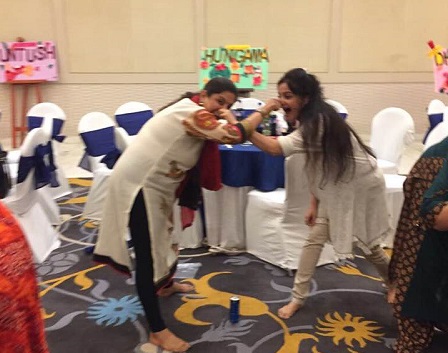 Dog and the Bone I guess is one of the most popular games of our childhood and thus all of us know how it is played but we played this interesting game in a new way in our ladies kitty party.

We actually played this game in our club party where we are almost 60 members. So all of us were divided into pairs so we were 30 pairs to play this interesting and super fun dog and the bone ladies kitty party game.

So, the hosts had 30 cans of Pepsi to play the game and there was one Pepsi with each pair. Like we do in the dog and the bone game, the Pepsi can be kept on the floor in the center and both the players were standing.

The host had a mic in her hand and she started shouting, Nose, Bums, Shoulders, Knees etc. and what we were supposed to do was to touch the called our body parts. The host then called up Pepsi in between and the player who takes away the Pepsi first won the game. There were three rounds played with the Pepsi can and the one who won two rounds took the Pepsi can.

This was a hilarious game and brought the laughter burst in our kitty party. Do try playing this game in your ladies kitty party or in your office party or even in a birthday party with kids around. Do not forget to tell me how you liked this game. Do leave a comment down below in the comment section even if you didn’t like the game so that I may know where can I improve.