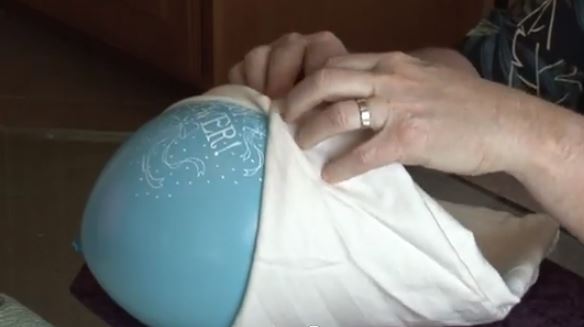 The image below is making it pretty easy to understand this baby shower game, but one thing that you don’t know is that the balloon is filled with water.

Isn’t that interesting to know !!!

It is one of the very funny party games and if you include it in the list of your baby shower party games, trust me you will thank me for sure.

As my most of the baby shower games and activities , this game is also best suitable for men as they usually don’t know how to tie a diaper to the baby. Call the men in the baby shower party to play this game. Before you start the game, you have to make the balloons ready. Take a number of balloons according to the number of guests you are expecting in your party and also arrange many diapers and diaper pins.

Call the men one by one and make them stand near a table where all these things are kept (water filler balloons, diapers and pins). The funny part is that the balloons usually bursts when men pin the diaper and water comes out and everyone starts shouting Pee..Pee…

It is once again a one minute party game and players will get one minute to tie diapers to as many balloons as they can. When the time starts players will start tieing the diapers. They have to complete the task with every balloon and when they tie the pin, it will considered as a complete task.

When the time finishes, the player with maximum number of balloons done will be declared as the winner. Include this baby shower game in your list of baby shower games and activities and have fun.