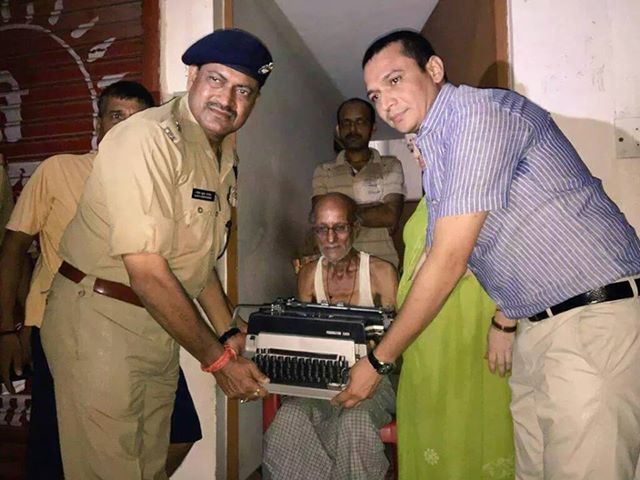 While the entire social media including Facebook and Twitter are trending with the story of Shree Mr. Kishan Kumar and his typewriter, we recently got updated with the news that the Lucknow Police has taken a quick action on the same and has gifted a brand new typewriter to Shree Kishan Kumar. Mr Kishan Kumar is a 65yrs Old and he has been doing Hindi typing for 35-yrs outside General Post Office(GPO), Lucknow.

As soon as the government of the city came to know about the incident, SSP Lucknow Mr. Rajesh Pandey and DM Lucknow Mr. Raj Shekhar themselves took the step to meet Mr Kumar and hand him over his new typewriter. The sick policeman who did this to Mr Kumar is reportedly suspended.

Mr. Kishan Kumar and His Typewriter 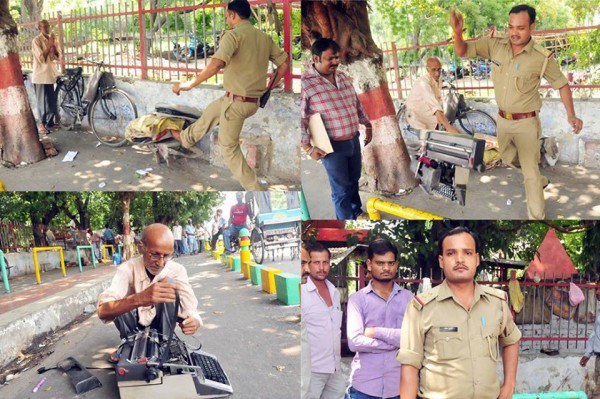 His name is Kishan Kumar 65yrs Old. He has been doing Hindi typing for 35-yrs outside General Post Office(GPO), Lucknow.

He’s been Working 10 hours a day on his old typewriter, which costed him Rs 5000, With lots of difficulty he was able to arrange that money to buy Typewriter, he earns only Rs50 per day.

But he could never imagine that the typewriter which earned him his livelihood to survive could not survive a kick from a sick policeman.

After the first blow he collected the parts and tried to put it back together, and folded his hands and begged for mercy from the Policeman . But the shining stars on the shoulders of the police officer were so bright that they blinded him and he couldn’t see the shine of stars dripping down the poor man’s eyes. He snatched the typewriter from the poor man with his powerful arms and threw it smashing it into pieces and shattered the dreams of poor man. ( You can see him in left top picture joining hands and begging for mercy to not destroy his only livelihood of survival)

65-year-old Krishna Kumar started collecting his dream wrapped in pieces of that typewriter. But every part of it cried like him, not able to get together. When asked what was he going to do., he turned towards us, eyes filled with water and flowing pieces of dreams in it, and said that he had been doing that job for the past 35 years. He has seen the world change before his eyes, maybe it was time to change himself. Now Hindi was no more needed for the country like his old typewriter. He kept looking at the pieces of the typewriter with the shattered dreams in his eyes.

How To Help Mr. Krishna Kumar

While people on Facebook have been asking about the way to help Mr Kumar, we have some information which may be helpful for those who are really keen to help Mr. Kumar.

Here is what you can do-

He doesn’t have a bank account but you can find him outside General Post Office(GPO), Lucknow.
Name: Kishan Kumar. Location: Lucknow
Mob: +919335052997

Do share this post to maximum so that more and more people know about this old man struggling at this age. Let’s unite and join our hands to help Mr. Kumar.