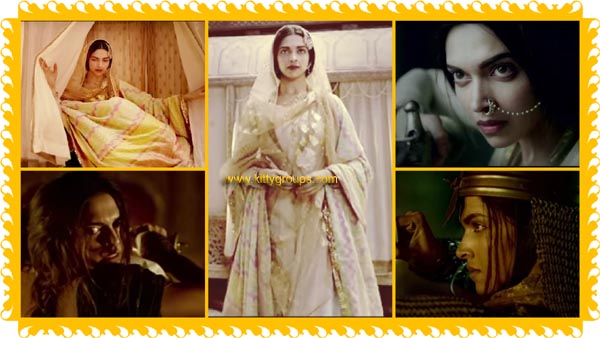 Deepika Padukone in Bajirao Mastani. After giving a splendid performance of a working Delhi girl in Piku, Deepika Padukone is now all set to give her best as a gorgeous and bold protagonists in her upcoming flick Bajirao Mastani. Produced by ace direcctor, Sanjay Leela Bhansali, Bajirao Mastani is a historical romance film which narrates the story of Maratha Peshwa Baji Rao and his second wife Mastani. Priyanka Chopra is playing the role of Bajirao’s first wife whereas our favorite Ranveer Singh is playing the lead role of Bajirao.

Deepika Padukone who is playing the role of second wife of Ranvir Singh here belongs to a Muslim heritage family in the movie, is donned in some stunning outfits in the movies as well as in some true protagonists costumes too. While there is not much pictures or videos released till now, we managed to bring some exclusive pictures of Deepika Padukone in Bajirao Mastani.

The costumes of both Priyanka Chopra and Deepika Padukone are designed by the leading designer Anju Modi. Ms. Modi in her interview says,” When both the female characters were described to me, there were many obvious and apparent differences between the two. Besides the peripheral differences (their appearance, religious influences and contrasting lifestyles), the uniqueness of both their personalities transcended to more elemental details like their demeanor, their perception of what was happening around them, their reactions and more behavioral aspects”.

Not just the costumes but the jewelry pieces in the movie Bajirao Mastani are also very special. As said by designer Anju Modi, jewellery pieces were specially designed to recreate the Hyderabadi Nizaam look for Mastani to highlight her part-Muslim heritage, and the heavy chailmail armours and leather footwear were designed to make Deepika look stunning in her battle scenes.